Michigan Expats - Commentary - See All Commentary
By Doctor
Yesterday, I received a save-the-date postcard for my 10 year high school reunion. Today, American Reunion opens nationwide. So the film has some relevance for me when I saw an advance screening of the film with a high school classmate on Monday.
We had a blast. Yes, the film is familiarly formulaic and crass filled with plenty of masturbation, MILF, and shit jokes, nudity, and ridiculous awkward sexual situations, but the packed theater in Grand Rapids laughed throughout the film as we were reunited with all of the characters from the American Pie franchise (not counting all the additional direct-to-video films).
Of course, I’ve always been able to relate to the American Pie films and characters. I was a freshman at a Grand Rapids area high school when American Pie came out in 1999.  Sex, masturbation, taking a shit at school, practice, inappropriate nicknames, prom, going to the lake, etc… were all things that we talked about and dealt with in high school (although nobody had sex with a pie). Hell, we even had a kid at school who looked like “Sherman” from the film who, duh, we consequently called “Sherman” throughout high school. On top of that, American Pie was based in West Michigan, “East Grand Falls” substituting for creator and screenwriter, Adam Herz’s alma mater, East Grand Rapids, Michigan.
Without a doubt, my ability to relate generationally and to a lesser extent geographically contributes to me enjoying the franchise more than I should, but I imagine some of my classmates having similar discussions at our reunion this fall. We’ll talk about wives and girlfriends past and present, kids, reminisce about the good times, and hopefully get into some minor shenanigans. We’ll even ask each other why we aren’t friends on Facebook or if we are, why we don’t comment on each other’s posts more often which will probably sound just as awkward as when the characters do so in the film.
No, the film is not for everyone, but if you have enjoyed the American Pie franchise over the past thirteen years, you’ll enjoy American Reunion.
Jim (Jason Biggs) still suffers the most awkward and embarrassing moments but survives with sage advice from his dad (scene stealing Eugene Levy), “help” from his friends, and his loving and still sexy band camp wife, Michelle (Allyssa Hanigan). Stiffler (Seann William Scott) still gets the best lines along with some sweet revenge on Finch for sleeping with Stiffler’s Mom (Jennifer Coolidge) who also returns and has some fantastic scenes with Jim’s Dad.
Check it out for nostalgic reasons (high school, 90’s music), in anticipation or fear of your own high school reunion, or just for a fun couple hours at the movies. Just don’t splash Steve Stiffler.
Posted by MichiganExpats at 12:35 PM 1 comment:

Michigan Expats - Commentary - See All Commentary
By Doctor
It's finally here. It is opening day for the Detroit Tigers as they kick off the season against the Boston Red Sox. Reigning AL MVP and Cy Young winner Justin Verlander got his pregame Taco Bell dinner last night and is set to throw the first pitch of the season to the AL MVP runner-up, Boston outfielder, Jacoby Ellsbury around 1:05PM EST.
There's plenty of pre-season coverage, so I'll add my 2 cents by presenting the Doctor's Rx for enjoying the Tigers 2012 season:
Alright, time for me to go get ready for opening day with friends and beer. Go Tigers!
Posted by MichiganExpats at 11:40 AM No comments:

Michigan Stereotypes - Where on the Map Do You Fit?

Michigan Expats - News - See All News
By Doctor
This photo has been circulating on Facebook and has generated over 16000 "Likes" and 8000 "Shares", so you may have seen it already. Whether or not, chime in and let us know where you're from in Michigan and if you think the artist has accurately described Michigan.
I grew up and an from the Bible Belt in West Michigan (GR), but spent a decade of my formulated years in the Cherry Lovers area of the state (TC). That's fairly accurate. According to the map, Mr. Sig is a Wannabe Gangster which also fits - deep down he knows it's true - and I expect him to talk about it on the next MichiganExpats podcast. 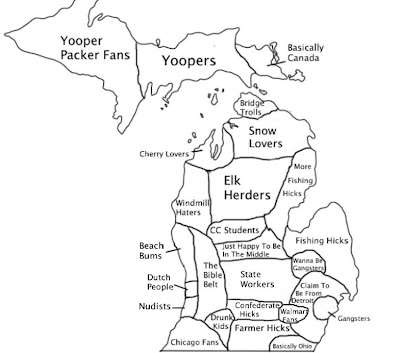