Last week, I put together a list of a dozen essential Michigan breweries and brews. On Saturday, I visited three of those breweries in person: Arcadia Ales in Battle Creek, Bell's Brewery in Comstock/Kalamazoo, and Founders Brewing Company in Grand Rapids.

Yes, I had a designated driver. In fact, there was a bus load of us, and the brewery tour itself was a fundraiser for NextGen, the young leaders program through the Heart of West Michigan United Way. Day of fun, check. Almost $1000 raised in one day, check.

Despite being just two weeks removed from Achilles surgery, I was not going to miss this. Along with my growler, I brought a wheelchair and crutches with me on the tour that departed from Founders Saturday morning. 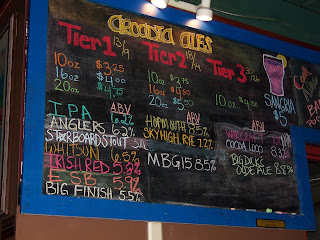 Tour: General Manager and Head Chef, Sean Kelly, gave the tour for our group of just over thirty. Fun facts from the tour: Arcadia's bottling machine dates back to 1957 and originally was used by RC Cola; Yoda makes sure that the canning machines works instead of "trying"; and that Arcadia uses open fermentation for their "harvest" beers (IPA's, ales, and ESB) and that the yeast, originally from England is roughly in it's 600th generation.

Not fun fact. The wheelchair that I had borrowed so I wouldn't have to use crutches all day, did not survive the tour. The front right wheel wasn't straight trying to go over a door frame and broke.

Going through the tour, it is evident that Arcadia has outgrown their present space in Battle Creek. Fortunately, they've already made plans to expand into a new facility in Kalamazoo that will break ground later this year.

Beer: My first beer of the day was Arcadia's ESB. I had not had it before, and was not disappointed. Great flavor with just the right bitterness. I followed that up with Warcraft which I knew was going to be tough to beat for best beer of the day from the start. A barrel aged Black Ale, Warcraft came in at 10% with a complex flavor profile of toffee, bourbon, with a vanilla flavored finish. Fantastic.

We also had lunch at Arcadia, featuring hummus with pita chips, quesadillas, and brick oven pizzas. After the tour, beer, and food, it was time to fill up the growler with Whitsun to enjoy on the bus on the way to our next stop. (after the jump) 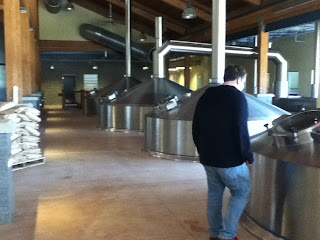 Tour: Our group was fortunate to be one of the first groups to tour the latest 200 barrel system addition to the Bell's Brewery facility in Comstock that was just finished in May. I was extremely impressed w the brewhouse and our tour guide, Gary, who took his time and provided a thorough description of the brewing process as well as the unique features of the new facility such as the energy storage system.

There were just two downsides to the tour. One, I had to go through the entire tour on crutches, and, two, they don't serve beer at the brewhouse. Not much I could do about one, but we fixed two by heading over to the Eccentric Cafe in Kalamazoo.

Beer: There was no shortage of beer on tap at the Eccentric Cafe. Trying to avoid the Bell's staples that I already know and love (e.g. Oberon, Two Hearted) I opted with the Black Rye - it may be August, but that doesn't mean I can't drink dark beers. The Black Rye had great flavor and balance and came in at a very drinkable 5.6%. I followed that up with the Java Stout which delivered on the full bodied and complex flavor profile I seek in stouts.

I also had sips of the Kal Haven Ale (different earthy flavor), Bourbon Barrel Best Brown (had the flavor but not the body), and the Oracle (excellent IPA - Hopslam what?).

I really appreciated that our tour guide, Gary, followed us to the Cafe and hung around to have a couple beers with us talking about Bell's and the beer.

I was extremely impressed with our experience at the Brewhouse and Eccentric Cafe as I was with the new Bell's beers I tried. It served as a great reminder of why Bell's has and continues to be a leader and innovator in the Michigan craft industry.

The wheel chair did not survive, but our tour survived and made it back to Founders on time. We did not have a tour lined up, but with the open floor plan and the doors open to the full length patio, Founders is a great place to finish a tour and unwind with a couple final beers. I opted for the Michigan Brewer's Guild 15th Anniversary IPA and Founders Porter to finish an impressive day of Michigan beer. I was pleasantly surprise with the 15th Anniversary IPA, and after praising Founders for their stouts in last week's post, the Porter reminded how well they do all dark heavy beers.

I think that should cover it. It was an awesome day. I highly recommend visiting all three breweries, but be sure to have a designated driver if you intend to visit all three in the same day. Please let us know about your favorite brewery tour experiences.

Posted by MichiganExpats at 6:23 PM