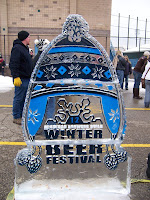 The NBA All-Star game and festivities were the highlight in Orlando, the Academy Awards drew red carpet coverage in LA, and the Daytona 500 was scheduled to start yesterday, but for 6,000+ people there was no better place to be this weekend than standing outside in a minor league baseball stadium parking lot in freezing temperatures surrounded by fellow Michigan beer enthusiasts with over 450 Michigan beers to sample from 61 different Michigan breweries at the Michigan Brewers Guild Winter Beer Festival.
I have to begin by saying a big thank you to Bob and Jop of The Grillin' Guys for allowing me to join them Saturday morning at Fifth Third Ballpark and help them produce their radio show live from the festival. They had a great guest line-up featuring Dianna Stampfler from PromoteMichigan.com; Right Brain Brewery founder, Russ Springsteen; Schmohz Brewery beer engineer, Chas Thompson; Randy Finch from Food Network's Ice Brigade; Travis Glenn from Dark Horse Brewery; and Tri-City Brewing founder, Kevin Peil. It's definitely worth listening to their interviews.
Throughout the day, I was most impressed with the creativity and passion present at the festival by the promoters and organizers, festival attendees, and especially by the brewers and entrepreneurs. This is an industry and festival that wasn't possible twenty years ago. Look for me to go into further detail about the creativity, passion, and entrepreneurship later this week, but for now lets stay focused on the festival and the beer. 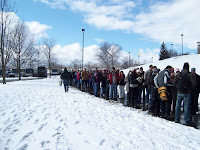 There were maybe a couple dozen people at the ballpark when we arrived to do the radio show (9AM airtime), so I got to watch the festival evolve throughout the day. There was the calm before the storm as brewers, staffers, and volunteers arrived in the morning, booths began to take shape, kegs rolling across the parking lot, and the aroma of turkey legs and humongous meatballs began to fill air as grilles and smokers were lit. Anticipation and energy was building outside the gates as the line began to form and stretched from way beyond the right field stadium wall all the way past home plate.
I admit, I didn't miss having to arrive early to wait in line to get in. In fact, I took full advantage of my media pass with the radio show to begin sampling beers in the hospitality area and at the booths before lines formed inside the gates. Although, the biggest benefit of the media pass was probably being able to use heated indoor bathrooms and avoid the port-a-john lines.
Disclaimer: Professional beer drinker. Do not attempt at home.

I have a bit of previous experience, but I normally don't condone beginning to drink at 9AM, especially at a beer festival that runs to 6PM. However, I managed to drink responsibly throughout the day thanks in large part to staying hydrated (CamelPack) and eating throughout the day (delicious meatball and pretzel necklace). Overall, I adhered to the advice I compiled and laid out in my preview column. The only thing that failed me was my attack plan; my program highlighting the beers I wanted to try blew out of my coat and into a puddle in the parking lot while I was making my pretzel necklace.
I missed out on some of the beers I had hoped to try, but I probably wouldn't have gotten to all of them anyway because of the lines. I would have liked to try some of the special taps at Founders, Bells, Short's, and Dark Horse, but I ultimately opted out of those longer lines and decided to check out more unfamiliar breweries and beers.
As a result, I particularly look forward to my next brewery tour through South West Michigan. While I wasn't terribly impressed with their Vengeance Cherry Stout (high alcohol drowned out the flavor), I heard great things about most of the 20 beers Greenbush Brewing Co. brought to festival. I really enjoyed the Anvil IPA from The Livery in Benton Harbor. My favorite beer of the day was the Cocoa Cognac Brandy Barrel Aged Chocolate Stout from Round Barn Brewery in Baroda.
Other stout highlights of the day were the Dragon Slayer Barrel Aged Imperial Stout from Tri-City Brewing; New Holland Brewing Co.'s Envious Barrel Aged Fruit Ale; Olde Peninsula Brewpub's Bourdon Stout; and Plead the 5th Imperial Stout from Dark Horse. 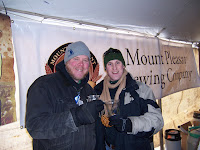 I also have to give a shout out and thank you to Mt. Pleasant Brewing Co. Brewmaster, Kim Kowalski and his gruit ales. Their Sacred Gruit Ale and Peach Gruit Ale were the most unique brews I had on Saturday and I particularly enjoyed the Peach. Kim took the time to talk to me about the gruit ales and how he's collaborating on a documentary  of gruit ales. I particularly enjoyed the description: "Mount Pleasant Gruit Ale contains a combination of herbs that together with the alcohol stimulates the mind, creates euphoria, and can enhance sexual drives." I can't vouch for all that after a couple small samples, but it definitely has a distinct taste and a finish that makes you want to lay back, relax, and just take things in. Definitely keep an eye out for it. 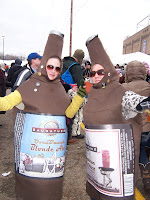 I was also impressed with the great costumes, hats, and pretzel/string cheese/jerky necklaces of festival goers. There were a pair of gals dressed as beer bottles from Saugatuck Brewing Co., a guy dressed either as hops or the Stanford tree, a girl with a beer mug hat made of balloons, and a guy with a penguin that became pretty popular. All these just in the pictures that I took at the festival. Check them out on Google+ or at our Facebook page.


Overall, it was an awesome festival. Hopefully, I won't have a family or reunion or wedding to go to this summer and will be able to attend the summer festival in Yspilanti, July 27-28.