Grand Rapids–#2 Best Place to Live in the US

Did you ever expect to see this?  I’ve been to Grand Rapids several times and I know people who live there.  It’s actually not that bad of a place.  It’s good, in fact.  So good, that Marketwatch thinks that it is the 2nd best place to live in the US.

Marketwarch technology columnist, John C Dvorak – of who I am a big fan - often mentions how these sorts of lists get made.  He used to work at Forbes and participated many times in the careful decision making that accompanied the creation of these lists.  Here’s how it worked – a bunch of editors sat around at lunchtime and threw out some candidates.  Everyone talked about it, argued back and forth, and eventually came up with a consensus.  Some predictable comments might be,  “Those guys got it last year… let’s drop them to 2 or 3 this year.”  “Naa, I’ve been there, that place is a dump.”

I’m sure this list was formed the same way, but there has to be some truth to it.  Someone had to think of Grand Rapids and argue strong enough for it to get it up to #2.

I’m sure my hometown of Flint just didn’t quite make the top ten.  I’m guessing it is #11.

Posted by MichiganExpats at 1:54 PM No comments:

Say what you want about the Bing search engine, but I might use it a little more now that they are featuring a beautiful Michigan Lighthouse. You have to get to it today before they change the image.

Check out more details regarding the Wawatam Lighhouse in St. Ignace here below. 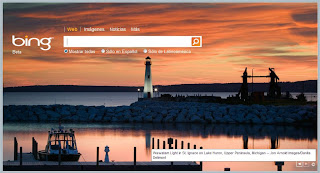