Should Rich Rod be given more time? 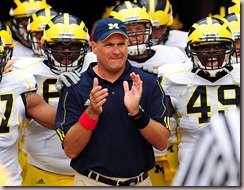 Good article above by Matt Deyoung from the Grand Haven Tribune.  Although his analysis is much more detailed, I will echo his sentiments and add one more.

I’m with Matt 100% on his statement that Rich’s past success indicates that he will eventually get the program around.  In addition, Rich Rod had some structural recruiting disadvantages upon arrival.  He failed on turning that around, but that would be a tall task for any coach.  If you think about it… what other coach in football could salvage that situation.  Or… if you were put in Rich Rod’s situation, what would you do differently that you actually believe would have kept the program on the top of its game?  As I’ve followed this, I hardly come across any pundit with a top 10 list of specific things Rodriguez should have done differently.

Let me add a few of my own points to Matt’s article.

All this being said, I’m not a big fan of Michigan’s coach, but I definitely think he’s capable of getting us some wins and even some shots at the national championship.  I think Michigan fans as a whole are going through some withdraw right now.  The fans simply cannot accept losing under any circumstances whatsoever.  It’s simply not acceptable and unfortunately, they’ve reacted accordingly.

Given Matt’s points and my points, my vote goes to keeping him.

Posted by MichiganExpats at 2:14 PM