Dax de la Monta sent us details about a Michigan party he held in New York.  Sounds like a good time! 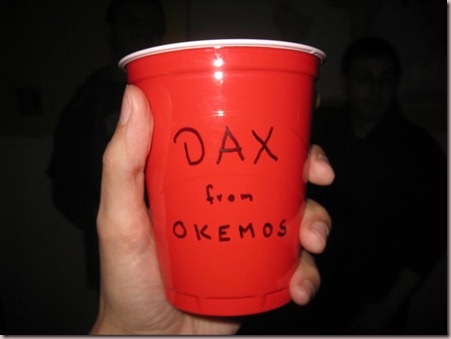 I'm an Okemosian writing from the Greenpoint neighborhood in Brooklyn, New York. There are a lot of Michiganders here in the Big Apple, as you might imagine. When I moved here about 4 years ago looking for work, I only knew a handful of people from college. Since then, I've reconnected with a bunch of folks from the Mitten and met friends of friends; at this point I know more Michiganders here than I do back home. Last year my housemates and I struck upon the idea of having a Michigan-themed party (I live with a couple other members of the diaspora -- when I first landed I was calling Craigslist sublet ads and randomly hit on someone from high school). It went over pretty well, so this year we ratcheted it up. Highlights included:

Hey Dax – any music suggestions for the podcast?

This was a great idea… maybe the Doctor and I will drive up there next year!

Posted by MichiganExpats at 7:44 PM