Michigan vs Ohio State anyone? 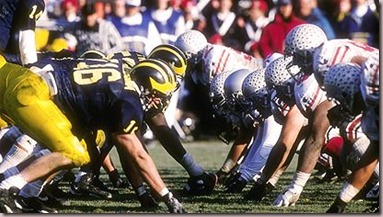 Does anyone care about this game anymore?  Sure, it is still the biggest rivalry in college football from a historical standpoint, but in the last few years it’s just seemed uninteresting since the result was (and is) always inevitable.

I remember that as a kid, this game typically had major national title implications and was almost always the game that determined the Big Ten championship.

It will only be a matter of time before Michigan gets its program back to a point where the stakes of this game are more than just pride, but in the meantime, don’t expect much of a game this weekend.  But… what an upset and national story it would be for Michigan to go in and win.  It’s not likely, but certainly possible.  I suppose we can safety say that this game has gone from assuredly being a good game to hoping it will be a good game.

Oh well, at least we took the UP and left them with Toledo.

Posted by MichiganExpats at 6:54 PM